Deciding the location of your camp is vital to a players strategy and how the camp will develop over time. Depending on your location, you may need to strengthen your defenses or focus more on development and growth.

The 1st decision of which nation to be a citizen of determines what slice of the "pie" you will start in. Midgard starts South, Arunafeltz starts more NW and Schwartzwalt starts in the NE. Also it will determine which guilds you are able to ally with. You can't join a cross-national alliance. So if you are starting with friends be sure you all join the same nation!

The 2nd decision of how close to the Dark Dimension you wish to start determines how your early game play will play out. 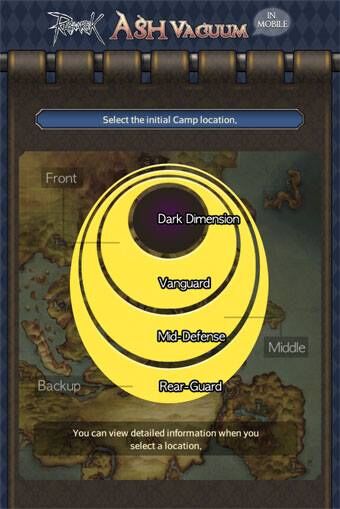 Vanguard: The foremost front line closest to the Dark Dimension. There is no additional Resource production since there are no Resource Fields nearby. It’s difficult in the beginning but you can quickly spearhead into the Dark Dimension and achieve unprecedented growth. However, the Camp you build in the Dark Dimension is open to attacks by enemy nations so be sure to build a tight defense.

Mid-Defense: The region at around half way to the Dark Dimension. You can achieve balanced development of the Camp while advancing into the Dark Dimension. But in reality, you fall a little short in both ways compared to other regions. This region is recommended for adventurers who do not enjoy single-sided extreme, but balanced game play.

Rear-Guard: The farthest region from the Dark Dimension. It’s difficult to join battles in the Dark Dimension from here, but with abundant Resource Fields in the area, you can achieve rapid development of the Camp. If you are more into developing and growing characters rather than the excitement of battles, then this will be your perfect choice.

Dark Dimension: Eventually you will be able to build a camp in the Dark Dimension, the resource bonuses are HUGE, but you also can be attacked by rival alliances and nations, so be sure you have an ample supply chain and support to hang out here! The opportunities to grow your guild empire and level up your heroic guild members is maximized here.

Retrieved from "https://ragnarok-ash-vacuum.fandom.com/wiki/Camp_Locations?oldid=4135"
Community content is available under CC-BY-SA unless otherwise noted.